i first started going to squat parties when i moved to london to study. i guess i already had a vague yearning towards alternative culture since i knew about cooltan, which unfortunately got evicted just before i got there in september 1995.

i was already into underground music and had been to some exodus raves in luton plus a few free festivals in london. there was the deptford urban free festival, where i heard zebedee DJing for the first time on a rig called something like avinit army, plus one on clapham common where the revolutionary dub warriors played. then there was hackney homeless in clissold park, whre i took mushrooms for the first time. it ended up in a riot... aaand that was the excuse for that not to happen again 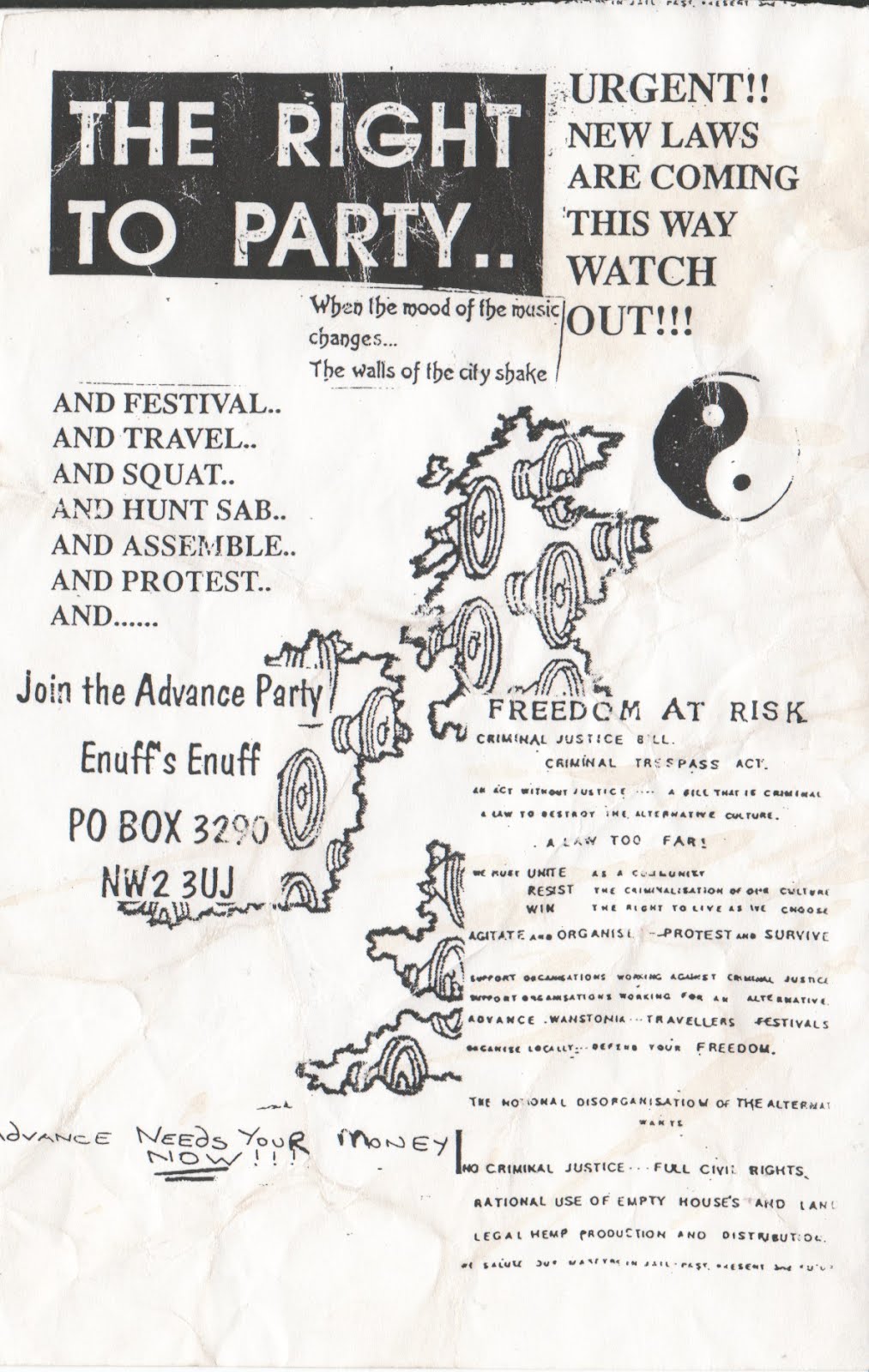 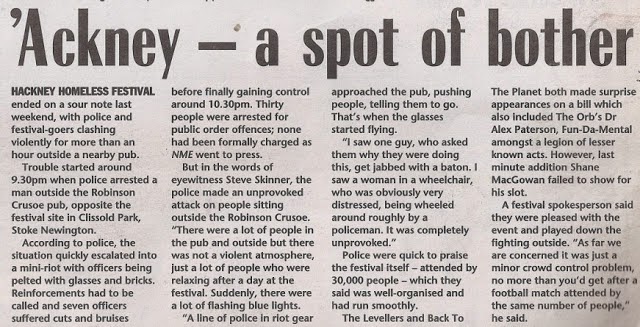 above is the nme report thanks to historyismadeatnight, which also links to a film about the fest

i picked up some advance party flyers at the festies and of course once actually living in london had a lot of places to explore. back in those days i thought nothing of clubbing thursday through sunday (without drugs even!) and i remember being given a vox populi flyer at the end of megatripolis. i didn't go and then they headed off to europe. spiral tribe were already gone. but not to worry, i found the infoline for an immersion party in manor house or somewhere in north london and headed up to a bingo hall and a party which blew my head off.

another early rave was a NYE bash on the corner of well street / mare street in an old cinema which is later became an iceland supermarket. we walked there from highbury and islington tube, not knowing london very well!  i think my first rave was in farringdon, or maybe that was later than the NYE party... 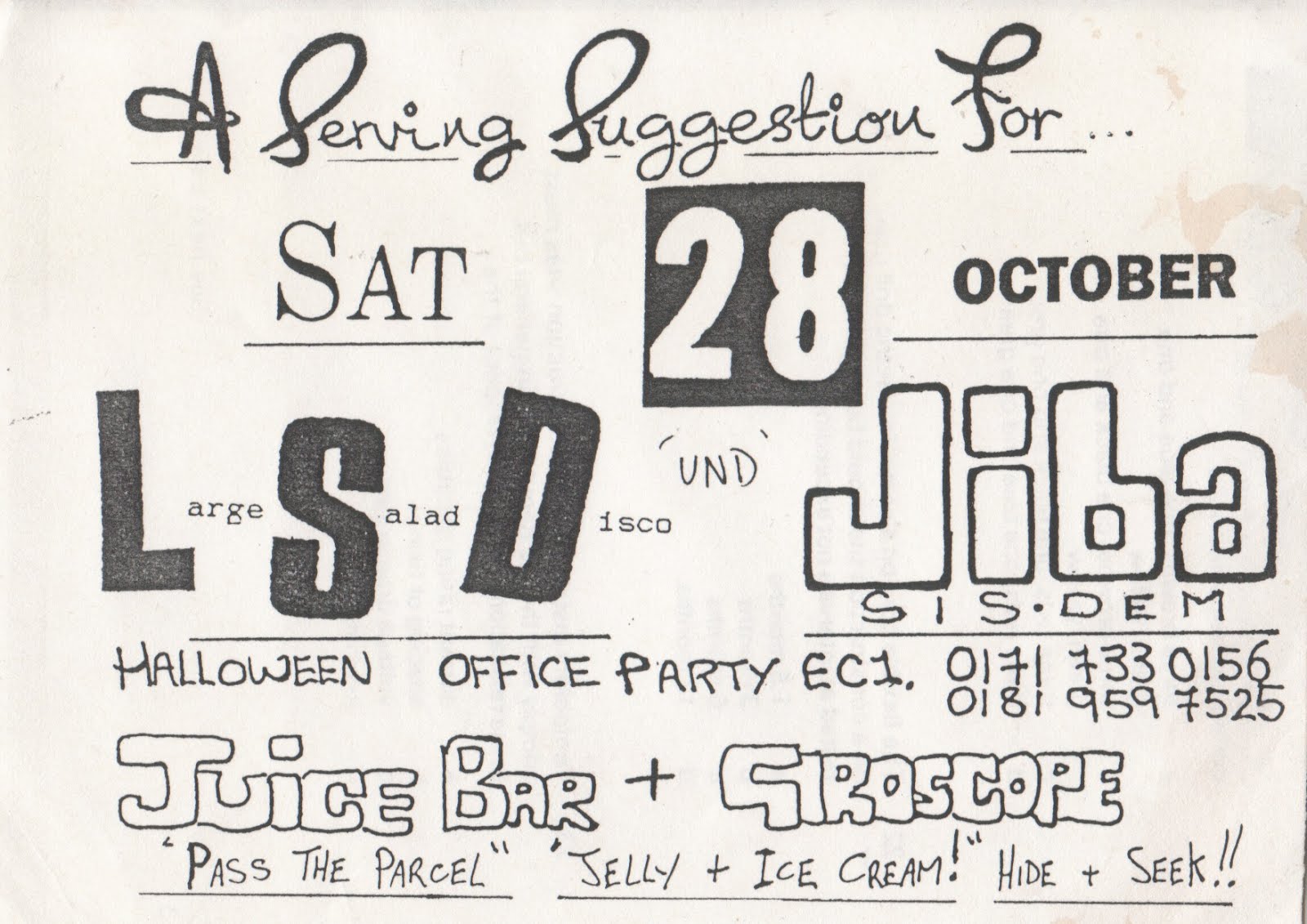 the farringdon party (above) was great, the guy on the door with a pierced lip said he thought spiral tribe were in germany but he wasn't sure and we sat in a corner as all these crusties (which in 6 months would be us) just kind of stood around and chatted. i don't remember anyone dancing and i couldn't process the music, it was just a wall of noise.

systems around at that time were mainline, virus, oops, insanity, jiba. all playing seriously good underground tekno, a language i started to understand. on rigs like immersion and also at parties like club alien and kinky techno (a semilegal immersion venture under kingsX station) acid trance was just getting going and that was great for a while before it stagnated. i remember when drum n bass was controversial (like there being a dnb room at hellraiser WTF!?!) but that soon started to feature. parties that stand out for me were: the hackney wick mashups - dace road, carpenters road ... one was a benefit for curley's family, since he had just died. i remember turning up late on acid, then taking K and forgetting i was on acid and spiral tribe's 'goign all the way' eviscerating my body.

the (unsound)cinema in wood green was pretty awesome for a few weeks - we turned up fucked after pride with little flashing wands (acid again - it doesn't get much better than seeing the pet shop boys sing go west as thousands sing along and the sky explodes with fireworks). the bullring at waterloo was pretty funny - outside, in the place where the IMAX stands now, as a benefit for the homeless who were being evicted. dan hekate talks about it in this resonance radio show:

my fave memory is someone playing this wicked anticore track:

come to think of it there were K-related religious experiences galore at that time. molly's book documents a lot of the places, even if i remember them slightly differently. and of course we were travelling out to europe for teknival - for a few summers that was what summer meant. systems like metek, dstorm, lego, furious, foxtanz, total resistance, sound conspiracy, samovar, damage control all twatting out amazing music through electrical storms.

czechtek was always great - cheap booze and amazing weather; dutchtek tended to feature loads of gabba and speedcore; paristek 2000 was where i made a lot of good friends before my travels had even started in earnest; slovtek; poltek; the list goes on.. and there were english festies like tolworth and the travellers field at glastonbury (RiP) and some great quarry raves in wales. by this time, there were newer systems like headfuk and hekate. and panik.

whilst i was living i europe i carried on raving, going to parties in and around prague from people like cirkus alien and vosa, but of course it's not the same without your drug buddies and a scene which you are part of. by the time i ended up in NL i preferred hibernation. nowadays its hard to find a good party, they still exist of course. the kids are no doubt doing it different now but i still (2013) try to make NFA and pokora parties.

from an old link zine:

when i was a kid i was really struck by this newspaper story about a guy who was found drowned in a quarry lake somewhere in south wales. he was positively identified by his family and about to be buried when 'he' turned up again, alive and well and wondering what the fuss was about. 'his' family must have been overjoyed to find out 'he' had simply gone off travelling for a while to sort out his head.

meanwhile the police must have been a bit frustrated to have to reopen a case they thought they had closed. apparently this man and the dead man bore a stunning resemblance, even down to a shared birthmark on their respective legs. obviously it's quite rare that we hear about such blatant cases of mistaken identity, but what if they don't happen so often not because people don't look the same but more because there are rules governing whereabouts the doppelgangers can go and most of the time they prevent them meeting up? it's possible but then of course you start to wonder who makes the rules. and does he/she have a doppelganger too?

definitely i see types of similarity - for instance a girl in a record shop with the same length hair, the same glasses and the same backwards tilt to the head which she adopts when looking at something as an irish girl i met in another country. are people really so different? are we really unique? or are we just a bundle of behaviour patterns grabbed from the collective unconscious and as with language we can unconsciously turn on or off various factors. with so many parameters to choose from that most of the time waht results is a real unique individual?

certainly the patterns can be traced. certainly fashion and society shape the way we look, whether we allow it consciously or not. well, my childish mind decided that everyone has a doppelganger living somewhere on the other side of the globe. although you must bear in mind that around this time, i was also trying to pull fully grown oak trees down with my plastic tractor, still it's a theory which cannot be denied. the sticking point was skin colour actually, i just couldn't decide whether doppelgangers were racially the same, they do have to be really, since for example one racial division is body build and i never resolved that one satisfactorily. and also another problem comes back to me now, namely whether the two doppelgangers would be born and maybe even die at the same time or not. the welsh quarry man could be a counterexample or the exception which proves the rule. i dunno.

anyway, this squat party in eindhoven i went to recently also got me thinking about this topic in a different way, for it is weird to see how things such as dress sense and face composition move in circles. i see this a bit having been to lots of tekno parties in the netherlands, the czech republic and england. if you look at the people it's strange to see how across arbitrary boundaries like nationality and location, things such as a look or a posture can be the same.

i guess you will only understand what i am droning on about if i give some examples. actually to start with the very building gave me deja vu, since it was a massive distribution centre, the type where one side of the building has loading bays which trucks back up to and inside there were huge empty rooms and tiny prefab office spaces, just like a distribution centre where i went to a few parties in london (tottenham hale). then the people reminded me of other people in various ways. in attitude, in action, in look, in gesture. maybe the drugs help, the same chemicals twisting faces in the same way over europe and driving evolution in new interesting ways.

base users do certainly develop this weird sort of reptilian tan. we can say for sure some sort of europe wide tekno fashion underclass is developing, i guess as tribes do. tekno sits in a grand line of cultual movements. the kids are always revolting. since the hippies anyway. so are we talking about some form of universal tekno resistance? in a sense yes, this is a brotherhood of sorts which can be nice to be a part of (things like meeting a french truck in eastern europe and bonding instantly because we are listening to the same mixtape) but then from another point of view tribalism is fake, it's a lowest common denominator movement, where people are afraid to be different and celebrate diversity. i guess that's the negative side of of all tribes. there is a uniform, there are facial piercings, bomber jackets, combat pants, mighty hooded tops, dark clothes and caps at jaunty angles which become more and more ridiculous as the night wears on.

but it does go deeper than that too. how come the gurl who looks like a drugged up czech punk i know, in the sense of having the same weird dreads, long grey german army jacket and big boots, also acts like her, drifting around the dance floor mashed up and encouraging men to molest her by bumping into them with the same far-away look in her eyes? isn't that a bit too weird? why do those speaker freakers hanging out by the stacks just like their tribal brothers in the czech republic manage to have high cheekbones and haircuts which actually make them look czech? yes, part of this is me bending my head on drugs and seeing links where the links exist because humans do resemble each other but i expect there is a bit more going on here. i'm thinking in terms of memes and affects: this notion current in the theory of ideas that ideas are virus-like; thoughtpatterns exist as electro-magnetic radiation; the brain is a transmitter and the signals it produces can be picked up by other receivers; and taking drugs probably helps this process either by making us more sensitive or anaesthetising us to it.

hooray for tekno parties, they're fun to go to and give you weird thoughts. and i don't have very much more to say than that.

except that we started off discussing doppelgangers and next time you are at a tekno party you should keep an eye out for your's.
Posted by intricate interconnectedness at Saturday, March 28, 2015 No comments: